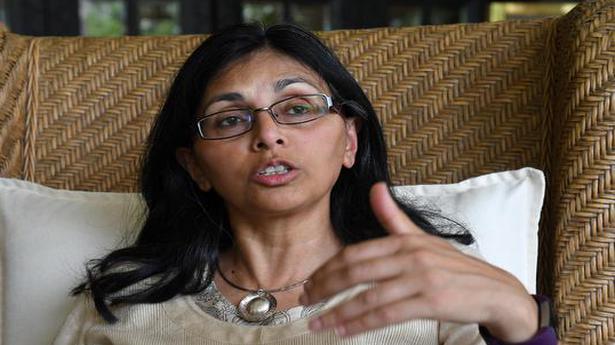 Should we expect much progress when Commerce Minister Piyush Goyal meets US Trade Representative (USTR) Katherine Tai for the TPF, in terms of resolving what have become persistent issues in digital trade, agriculture, medical devices, GSP, etc.?

My own expectation based on conversations with both governments is that this is really a more foundational meeting — the first meeting between Ambassador Tai and Minister Goyal, It’s really about trying to re-establish some of the institutional and foundational processes like the Trade Policy Forum. And, so, I’m not expecting that there will be major results that are announced.

But I do think that it’s an opportunity for both governments to align expectations, align approaches, and perhaps create a roadmap for where they want to go. So, whether they can, in the process of doing that, try to advance a few key outcomes — I think we would welcome that. We think that there are things that are ready for resolution that both governments and both countries have invested a fair amount of time and effort in trying to resolve. And I think that they should try to get a few of those things done.

There’s a sense that the US is at present not keen on negotiating a significant trade deal with India and wants to resolve smaller pending issues first. Should we see this as part of a general approach of the Biden administration to fix existing issues before embarking on more ambitious deals, such as it has done with Europe and the aircraft dispute?

Well, certainly the Biden administration has made it fairly clear that it is not focussed right now on negotiating trade deals, but rather on addressing and focussing on domestic competitiveness and on the domestic economy. I think that it’s a mistake to think about domestic competitiveness and resurging the American economy as separate or isolated from eking out trade deals with our close trading partners. I think that the two go hand in hand, particularly since the majority of, or a very significant portion of, American jobs are export-related jobs.

That said, I don’t know that the US-India trade conversations to date set themselves up for immediately launching into a conversation about an FTA. I think that there is interest and opening on the Indian side in ways that we have not perhaps seen before, in embarking on that path to an FTA. And I think the Biden administration should lean in as it sees that opening.

What would be the impact on bilateral trade of any CAATSA sanctions by Washington on New Delhi for taking delivery of the S-400?

Well, first of all, I do not believe and certainly do not think that sanctions should be applied to India. We’ve been very clear at the US-India Business Council, at the US Chamber, that we believe that sanctions against one of our closest partners and most important partners is inappropriate and counterproductive and that certainly there are legitimate concerns around the implementation of the S-400 in terms of the impact on US technology and on interoperability between the US and India. Those are things that both governments need to sort through, but nowhere in that equation does sanctions advance the interests of either country and of the partnership.

That said, I think there is so much at stake for both countries that whatever emerges, whether it’s on the CAATSA front or any other front, both nations have a compelling strategic interest to work through any areas of divergence, because the areas of convergence are so critically important for both governments.

So, in a hypothetical scenario where there are sanctions, do you see that affecting trade?

Inevitably, it will affect many different areas. I don’t know that getting into hypotheticals is productive. I think it’s hard to know. Clearly, an application of sanctions would disappoint and even anger many on the Indian side and what would the implications be? I don’t know. I don’t think we should take that chance.

Should we expect labor and environmental standards to be on the table from the US side, when it is eventually ready to discuss a larger trade deal with India?

Well, it’s certainly important for the Biden administration and historically has been important for the Democratic Party to make sure that there is appropriate discussion and handling on labor standards and on environment. And frankly, on the environmental factors, that has become even more of an imperative in the current situation on climate change and the climate crisis.

Labor and environment don’t necessarily need to be a problem because I think that the Indian government also has strong views on the climate challenges that it is facing, and I think that these can be areas where the two can actually find some common ground and some areas for collaboration.

In terms of the Generalized System of Preferences (GSP), is that on the table any more, given it’s no longer just a question of the Biden administration admitting India back into the program but first a question of when the US Congress will reauthorise the program ?

I think it should be on the table and I think that the GSP program is a very important program. Certainly, we at the US Chamber are urging Congress to reinstate that program. And we think that a reinstated GSP program should include India as one of the key partner countries and beneficiaries. I think that it is a win-win for the US and for India.

Given GSP has to be reauthorized by Congress, what do you think some of the areas are that the Biden administration can move on that would be of interest to India?

Well, I think that there are many areas where the US and India need to be working together. Certainly, the digital economy is one that is of growing importance for both countries. And being able to support growth in that area should be a matter of priority for both governments to eke out some agreements that shape that digital ecosystem, so that we don’t have fragmentation, [and] we don’t have regulations that are contradictory and that make it harder for US and Indian companies to be able to embark on digital trade and to grow the digital marketplace.

In the life sciences space, we have seen that pharmaceutical supply chains are critically important. India is playing a very key role in supporting global vaccination supply in the COVID-19 pandemic. It just underscores the priority and importance in trying to resolve some of the challenges between the US and India. To see more American investment and more American manufacturing in the life sciences space moving into India, I think, would advance both countries’ and industries’ goals and objectives…so it ought to be another area of ​​key focus during these conversations.

India is looking to see how it can attract more supply chains and a lot of that deals with market access. And there are areas that India is seeking greater market access in the United States and so there is scope for the two countries to really start thinking about what are the key areas that that they want to align on.

American COVID-19 vaccines are not available in India yet due to protracted discussions between vaccine manufacturers and the Government of India. Can you tell us anything about when we can expect a resolution to these talks?

I don’t have any insight into when. For many weeks — and even months — we’ve been hearing that it’s imminent and I know that there are issues that need to be resolved, particularly questions of indemnification for those that are under emergency use.

Now that some of the vaccines are starting to move away from emergency use and into fully authorized [use], it might change the calculus.

But look, I think the question is less material because India is so far along on its vaccination goals as well. Certainly, having greater availability of more vaccines would benefit the Indian people and would accelerate the vaccination goals. But I think also the larger focus of the vaccine manufacturers at this point is about the partnership with India in production to advance the global supply.

In 2019, you had said, in the context of US-China trade tensions, that India would need to make a bigger play for companies leaving China because they were going to Vietnam, Cambodia and other countries. And you’d said complacency is something to guard against. What’s your assessment of the situation now, two years down and in this new context? What does India need to do to attract these supply chains?

I think the issues are still very much the same. I want to commend the Indian government for some significant steps that have been taken, including the PLI [Production Linked Incentive] schemes that are meant to incentivise and attract investment in manufacturing in key sectors. And I think that those are all very helpful and I see companies that are starting to take advantage of them. I think the further liberalization for FDI in certain sectors is also another very positive signal. The policy repeating retroactive tax liability, I think, [is] another big step.

Companies are looking to de-risk, to diversify, and regionalise their supply chains to be closer to markets, rather than having it all in one location. That said, it’s a big expenditure to move a supply chain. It’s also a lengthy process. You’re not going to move an entire supply chain ecosystem. It’s going to come in stages and it requires, therefore, a much more flexible environment in terms of local content requirements and such, because all of the materials that are needed for most of these supply chains are not locally available.

So, I think you have to address market access because for a supply chain to relocate, it has to have the market that is going to support it. You have to have regulatory transparency and stability, because it’s a high capex move to shift supply chains. You need to be able to have some stability over a period of time that is going to require to get that supply chain moved and to get, essentially, the RoI [return on investment] on that. So, I think a more holistic approach in India on the policies — policy coherence — is one that is stable and consistent in how it is treating these new investments coming in.

(With inputs from Suhasini Haidar)