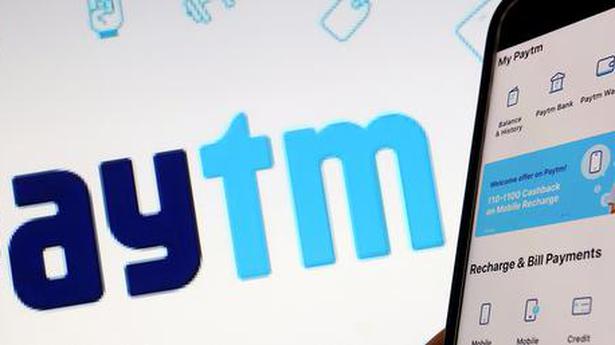 How did Paytm’s shares, after India’s biggest IPO openings to date, tank on the stock market?

The story so far: Financial technologies platform and Paytm’s parent company One97 Communications recently came out with India’s largest initial public offer, an ₹18,300 crore share sale that included an offer for sale portion from existing shareholders. While the share sale did raise the intended amount, the subscription frenzy seen in other IPOs was noticeably missing here. And sure enough, the stock tanked 27% on Thursday when it debuted on the stock markets.

How does Paytm’s IPO compare with other recent ones?

In comparison, fashion e-commerce firm Nykaa saw its retail portion subscribed 12.3 times. Nykaa’s offer aimed at raising ₹5,352 crore at a price of ₹1,125 per share. On the first day of its listing, the stock almost doubled from its issue price to close at ₹2,207. Data analytics company LatentView also tapped the markets to raise ₹600 crore, with the offer price at ₹197. The retail portion was subscribed 119.44 times. It debuted on Tuesday with a 169% increase over its offer price, at ₹530 apiece.

What is the perception of Paytm’s aspirations and its business model?

Overvalued is how investors seem to view Paytm’s business. On Paytm’s debut day on the stock exchange, investment banking firm Macquarie said it had a target price of ₹1,200 for the Paytm stock, compared with the offer price of ₹2,150. ‘Too many fingers in too many pies’ is how the brokerage firm described Paytm. Under its umbrella, Paytm offers wallets, a payments banking service, a payment gateway, consumer lending through merchants and Non-Banking Financial Company (NBFC) tie-ups, credit cards, wealth management, insurance distribution, ticketing, gaming and a mini app platform. The report pointed out that dabbling in multiple business lines “inhibited Paytm from being a category leader in any business except wallets, which are becoming inconsequential with the meteoric rise in UPI payments”. This was evident in the RBI’s monthly bulletin for November, 2021, which showed that the volume of UPI transactions had galloped faster than that for wallets in September. The volume of wallet transactions grew 7.4% to 3,884.65 lakh in September 2021, from 3,616.58 lakh a year earlier while the UPI transaction volume increased 103% to 36,558.17 lakh in September 2021, from 18,001.67 lakh a year earlier. Macquarie also stated that in most of Paytm’s businesses, competition – clear and present in the form of Amazon, Flipkart and Google, among others – and regulation would drive down unit economics and/or growth prospects in the medium term. It said Paytm’s absence in the lending business prevented it from making any significant money by merely being a distributor.

The brokerage said that a fee on UPI transactions would augur well for Paytm, but that is not the case now. And for it to lend profitably, Paytm needs a banking license, credit underwriting experience and collection infrastructure, “all of which are lacking currently”.

What else may be contributing to the poor investor interest ?

Another factor that likely caused the lukewarm response was the company’s propensity to burn cash.

As per Macquarie, which cited research and company data, Paytm has raised total capital of ₹19,000 crore since inception but accumulated losses have been in the region of ₹13,200 crore. In other words, almost 70% of the capital raised has funded losses. It pointed out that for the years FY17 to FY21, total equity capital that Paytm raised came to ₹14,200 crore but the turnover generated in the same period was only ₹13,000 crore. Macquarie pitched the current net worth of Paytm at ₹6500 crore.

Paytm founder Vijay Shekhar Sharma said business models of fintech platforms such as Paytm were not fully understood by investors and that it would take time for clarity to creep in. Media reports have quoted him as saying that Paytm’s business was “not as simple as delivering food or selling a mobile phone”.

In another report after Paytm’s listing, Macquarie too said that investors would take time to understand the fintech business model but its perspectives were entirely different from Mr. Sharma’s. It pointed out that those bullish on the stock were likely influenced by the GMV (or the gross merchandise value, ie the value of sales that the platform enables for sellers). Paytm may make some revenue if the buyers use its wallet but if they use it to just transact with apps on the UPI platform, then a player like Paytm makes no revenue through fees.